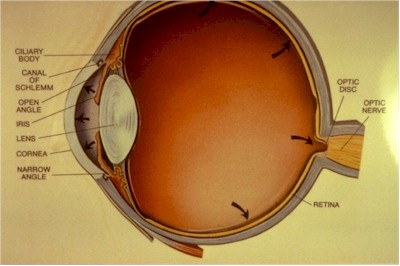 Glaucoma accounts for blindness in more than 5 million persons. It is the leading cause of blindness in African Americans and the second leading cause overall in the United States. Glaucoma typically occurs after 40 years of age, although there are several types of glaucoma that present at an earlier age.

Who is at risk? 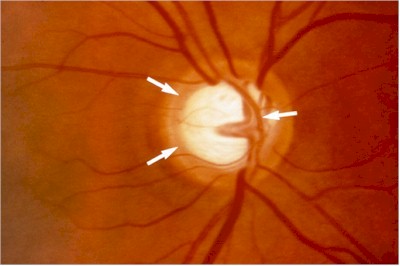 In glaucoma, the optic nerve - the nerve that gives you your vision, which comes off the brain - becomes compressed. This is how you lose your vision.

Glaucoma is a multifactorial disease. Current theories include increased pressure within the eye, decreased blood flow to the eye, and genetics.

Are there any symptoms?

Glaucoma usually presents without any symptoms and thus is called the "sneak thief of sight." At first you may lose your side vision, which may be unnoticeable to you. Late in the disease, after much of the optic nerve has been destroyed, you may lose your central vision, which then becomes noticeable. There are a few types of glaucoma that may have symptoms; such as glaucoma in newborns that may present with eyes that appear large and have a white hue to the front surface of the eye or sudden attack glaucoma where the eye becomes very painful and red. These, however, are a minority of cases in the United States. The majority of glaucoma is asymptomatic.

How will my doctor determine if I have glaucoma?

In addition to a careful optic nerve examination and eye pressure measurement, there is a test called a visual field which can be done to determine how much of your vision has been lost. This is why it is so important to catch the disease early.

Will I go blind?

Many people are devastated when they are told that they have glaucoma. It does not necessarily mean you will go blind. It is extremely important to note that once glaucoma is diagnosed, there are a number of interventions that may be sought to prevent further vision loss or slow down the vision loss to a rate that will not affect your daily life. One of the most important factors in determining your ultimate outcome is how early the diagnosis is made. Vision that has already been lost from glaucoma may not be restored currently. However, further vision loss may be preventable.

How does glaucoma develop?

In order to understand how glaucoma works, you need to think like a plumber.

If you visualize your kitchen sink, there is a faucet and a drain. In the eye, the faucet is always on (by the way, this is not the tearing system, this is a separate plumbing system inside the eye). Moreover, in our analogy, the drain is always open.